Do you suffer from a constant ringing in your ears? You may be suffering from tinnitus.  Our audiologists in Houston can help evaluate your condition and recommend the best solution through the use of new therapies.

Why Choose Us for Your Tinnitus Relief?

Memorial Hearing is a service-oriented audiology practice. We treat you the way we would want to be treated, providing personal attention to your individual hearing needs. We offer various levels of services to keep your hearing at its best for years to come.

Memorial Hearing has helped hundreds of patients lead more fulfilling lives by fine-tuning their hearing aids with great care and precision. We have served the greater Houston area since 2009. Once you have told us your history and your personal expectations with regard to your hearing, we provide you with detailed advice on the most appropriate products to meet your requirements. 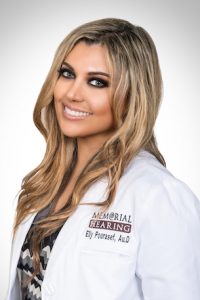 Dr. Elly completed her Bachelor of Science as well as Doctorate of Audiology degrees from the University of Texas at Austin. She has been seeing patients since 2003 and loves what she does! She has a well-rounded experience in Audiology and has worked in many types of offices, including Ear, Nose, & Throat offices, Hospitals, as well as the V.A. Medical Center. She believes that one of the most important aspects of what she does is counseling, and taking the time to answer any questions or concerns that the patients might have. Since this is a private practice, Dr. Elly has the luxury of taking the additional time if needed, so that the patient does not feel rushed. 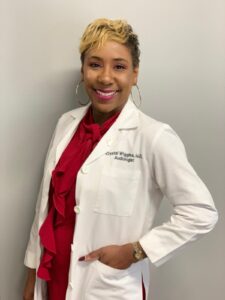 Dr. Crystal Wiggins has been practicing audiology for more than 13 years in the Houston Metroplex area. She received her Doctor of Audiology degree at Lamar University in 2007. Dr. Wiggins is Board Certified in Audiology, a fellow of the American Academy of Audiology, and holds a Certificate of Clinical Competence from the American Speech & Hearing Association. Dr. Wiggins is also a certificate holder in Tinnitus Management (CH-TM). Dr. Wiggins has a passion for assisting patients in a life-long journey of better hearing. She takes time to travel to countries such as Trinidad & Tobago and Guatemala to help those with hearing loss including helping with setting up audiology clinics in those underserved communities. Dr. Wiggins is here to help you hear better!

Get a Patient Evaluation by an Audiologist

If you are bothered by a constant sound (or intermittent for that matter) in your head or ears, you should have it evaluated by a Houston hearing specialist. You will be questioned to learn as much as possible about your experience of tinnitus and to understand when it is the most bothersome.

Comprehensive testing of your hearing will be made and a set of measurements performed to match the pitch and effective loudness of the sound you are hearing. This is useful when using real sounds to mask what you are hearing, which can make it less disturbing using habituation techniques in tinnitus retraining therapy (TRT).

Though it may not be possible to treat or cure the root cause that leads to tinnitus, new methods for dealing with tinnitus are available. This does not treat the underlying condition as there is technically no cure for tinnitus but instead trains your brain to not be bothered by it. If you think about certain real sounds, like rain falling on a roof or an AC unit running, though you hear them at first, your brain can ‘tune them out’ when you are concentrating on something.

Similarly, your Houston audiologist can help you use this ability to reduce the negative impact of your tinnitus. This is a multi-pronged approach involving reducing anxiety levels and masking tinnitus with other real sounds, with the goal of habituating your brain to it so it does not trouble you.

If you are struggling with the effects of tinnitus or otherwise have a problem with your hearing, contact Memorial Hearing to schedule an appointment to have your ears evaluated and learn more about Houston tinnitus therapy. Call (713) 984-7562 with any questions. 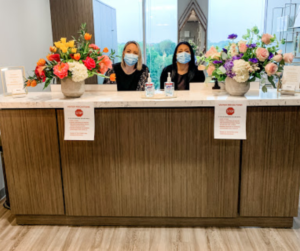 Schedule an Appointment with Memorial Hearing

Hearing loss can be treated, and there are many options for all levels of severity.

If you or a loved one has a problem with their hearing, contact Memorial Hearing today to schedule an appointment. Call (713) 984-7562 today for more information.

“I had an amazing experience! I had a
suffered through a steady decrease in my hearing for nearly 2 years. I also suffer from Tinnitus which had worsened. I’d been trying to use home remedies but nothing was working. I searched on Google and found MH, and my husband made an appointment! Note: I had to wait a couple weeks so don’t delay! The overall experience was great. It was clean; they sanitize between each client. It was thorough, they explained everything. It was effective; I really could finally hear better! The cutting edge machine made everything quick & easy! And, as if it couldn’t get better: the price was affordable! Thanks Dr. Elly & staff! 🎉💯🏆”

Tinnitus is the perception or hearing of a sound that isn’t really present, meaning you still hear it even in the absence of measurable sound. Although many people associate the word tinnitus as having “ringing” in the ears, is really the “umbrella term” for any kind of sound, whether it’s ringing, buzzing, chirping, pulsing, sizzling, high pitch, low pitch, etc. It can occur in one ear or be in both, although sometimes it just sounds like it’s in the middle of the head as well.

Though tinnitus usually is not physically harmful, it can be disturbing, especially if it leads to anxiety, stress, difficulty sleeping, and fatigue. Ironically, these are the same things that can exacerbate tinnitus, so it’s best to avoid stress, fatigue, too much caffeine, and such if suffering from tinnitus. It can also greatly interfere with your powers of concentration, so it’s important to look into options if you suffer from tinnitus.

Tinnitus refers to the condition of hearing sounds that aren’t there as opposed to the underlying cause, which can be due to a wide range of factors. Age plays a role, as can permanent damage caused to sensitive cells in the ear due to exposure to loud noises over an extended period. Acute exposure to loud noise can lead to temporary tinnitus that resolves itself over time. Tinnitus usually goes hand-in-hand with hearing loss, although there are many people who have tinnitus that have a normal hearing as well.